I had to branch out from my typical theater and go arthouse for this morning’s title, Much Ado About Nothing. 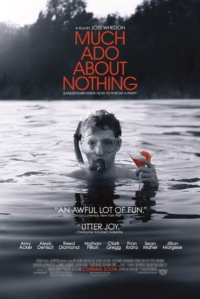 I carried in with me some emotional baggage related to director Joss Whedon. We have a (one-sided) history, he and I. On the one hand, I obsessed over his shows Buffy the Vampire Slayer and Angel with the level of manic fetishism of which only teenage girls are capable. Even now that my passions have had decades to cool, I still think he writes the most brilliant dialogue. On the other hand, I feel that he creates intriguing characters and universes but then has no clue what to do with them. He’s completely incapable of writing a happy relationship, and so he breaks up every couple. He paints himself into a narrative corner, and then inevitably the only solution he can come up with is to kill someone. Preferably whoever is currently the fandom’s most beloved. That’s not drama. That’s just laziness.

At a certain point, I tired of the one-trick-pony mindfuck that is part and parcel of loving Whedon’s works, and I declared that enough is enough. I boycotted both Dollhouse and Firefly. And still bitter years later, I was livid when I heard that he had been entrusted with The Avengers. Let it be known that I accurately predicted that Whedon would execute Agent Coulson* before they even began shooting principal photography. Seriously. That is a true story.

But then an odd thing happened. On the recommendation of a friend, I saw The Cabin in the Woods. I rationalized that slasher horror was really the perfect genre to use to re-engage with Whedon because most or all of the characters are supposed to die anyway. So you can’t get angry at him for killing anyone. But while I entered the theater with the bar set low (“please at least let me not leave pissed”), I left in love. Again. What I did not predict is how that little film would become one of my favorites from 2012. And it set me up to go into The Avengers with an open heart that allowed me to be wildly entertained with no regrets.

Anyway, that was a long way to go just to get to Much Ado. Which is also really great. Whatever his faults, I have to hand this to Whedon. He had all his buddies over to his own house to film what amounts to a glorified home video over only twelve days just to blow off some steam on the side while also making a huge blockbuster extravaganza. And the end result is so much better than a lot of movies that other people make with actual budgets.

I appreciate that the performances are effective in making the language quite accessible to modern audiences. Also, updating the setting while leaving the text alone typically works really well for me with Shakespeare adaptations. I just like that stylistic choice for some reason. It only becomes jarring in instances of severely outdated gender politics late in the play.

The only other jarring aspect involves booze. Whedon’s version of the play essentially takes place at this epic, week-long house party of rich people. And so everyone is at least a little toasted at all times and frequently quite drunk. It makes sense within context, but it was still weird for me to see people fixing themselves a stiff one first thing in the morning without the point of the movie being the perils of alcoholism.

Even though Whedon is obviously constrained from introducing his signature reference-heavy flourishes as he didn’t write this dialogue himself, he still manages to use the staging to inject his own flavor of sly wit into the proceedings. I particularly enjoyed the use of a Sprinkles cupcake as a prop in one scene; it was a laugh-out-loud moment and also everyone knows that I am a cupcake fiend (and Sprinkles is my favorite pusher).

While it might not be the best Shakespeare of all the Shakespeares, it was charming. And it was good enough to touch off a hunger in me. I’m considering maybe going back to read the original source or rewatching the Branagh version or seeing what other titles might be available on Netflix Instant (looks like Ethan Hawke’s Hamlet is available).

* I actually forgave this enormous transgression because, you know, comics. Does it really matter in the grand scheme of things? Apparently not.